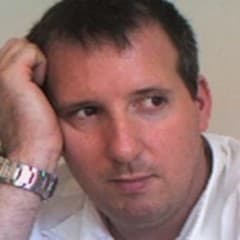 How did you get into video games?

My first real true gaming experience came from my parents buying me and my brother a Aquarius computer but this was pretty rubbish and all my friends owned ZX Spectrums and BBC computers so we took it back to the shop and switched it for a ZX Spectrum + and the rest is history.

Which arcade game did you spend the most money on and why?

Mmm, great question. I would say Outrun by Sega and this game blew me away and has been a firm favourite game of mine since.

Your first console? First game for that console?

My first console I think was my SEGA Megadrive but really can’t remember the first game.

What was the game that blew your mind?

Ridge Racer on my imported Japanese PlayStation 1. It was awesome and my gang of friends would come around and we would compete for the best time lap times.

What got you into creating graphics?

I have always love drawing and I started to learn Deluxe Paint on my Amiga and then transitioned to Photoshop which really allowed me to get into the game development.

What was the first game you worked on?

The first real game was ‘Sink or Swim on the Amiga with my friend which was released by Zeppelin games in 1993.

Which video game world would you like to live in and why?

That’s a great question…Sim City because I can live in the big city which I really love and then I can build another home and keep moving in different buildings and updating it.

What modern game do you utterly love?

Call of Duty in any version is my goto game. I just love the multiplayer combat and it relaxes me, sound weird but it does.

Have you got a favourite soundtrack or piece of game music?

What is the trick behind eye catching graphics?

Clean, crisp design and colourful. Design with the end vision in mind and remember that art appeals to all but people have different tastes in artwork so keep it clear in design, colourful and make sure the style fits the intended product and audience.

What style of game do you enjoy? Platform, free roaming etc and why?

Tell us a little about the evolution of the graphics for Mr.Gunboat ?

Mr Gunboat or ‘Floaty Boaty’ as it started out needed to be clean and have a colourful design as the action is fast paced so I kept the colours sharp and bright, added a black cartoon outline to make the sprites pop off the background a bit but also give them a slight cartoon look to appeal to the style we were going for.

We decided to go for a more cartoon look to appeal to a wider audience of gamers. .

As the game has evolved the graphics have not really changed apart from the main boat design which after playtesting pushed me to look at the original design and improve it greatly. Think it looks much better in the 2nd rendition.

How different is is designing for a mobile game to a PC or console game from the past?

You have to take in the performance of the system you are developing for mobile as the hardware is improving all the time and they can perform great things especially with using systems like Unity but Gamemaker is a bit limited in most aspects of building a full modern advanced game but Gamemaker is great for 2D games which we as a team love and we have some great 2D projects planned.

We are currently working on a game using Unity which will hopefully be released on PC/Steam, Mac and console if we can get support from a publisher.

Do you have to redesign Mr.Gunboat on different devices and platforms?

Not sure at this moment in time as we have only completed the Android version but maybe with the tablet versions we may have to fix some things.