A quick chat with Trevor the code master general.

A quick chat with Trevor the code master general.

I am Lee. The voice of Mr Gunboat. I have enjoyed doing radio in my life and now enjoy doing silly voices for Pixel Playbox. I also find it fun interviewing everything I come across. Today I came across the Codemaster Trevor Bruce of Pixel Playbox and thought It might be fun asking him some questions…

Hi Trevor! Firstly can you tell me how did you get into video games?

When I was younger our family used to go camping to a site called ‘The Golden Coast’ in North Devon.
It was great place that had excellent facilities and was very close to the amazing beach at Woolacombe.

The site had a small entertainment building that had a small dark room on the side that was full of arcade games. I remember spending a lot time in there watching other people play classics like Space Invaders, Gorf and Asteroids.
This was the late 70’s and early 80’s.

Which arcade game did you spend the most money on and why?

In the late 80s I could drive and many evenings I would travel with friends to Dawlish Warren [Devon resort, UK].
At the end of Dawlish Warren there was a fantastic arcade centre and I remember putting a lot of money into Gauntlet. We would turn up with a bag load of 20 pence coins and spend an evening having multiplayer fun.

Our first console was a Binatone which was the standard pong rip-off.
My first computer was a Sinclair ZX Spectrum 48k. The first game I played on it was Horace Goes Skiing.
I had my Spectrum in Christmas 83 and was lucky to get 3 games with it.
Flight simulator, Horace Goes Skiing and Planetoids (I think).

What was the game that blew your mind?

In the Arcades the original Star Wars game was awesome.
The first game I owned that blew my mind was Atic Atac by Ultimate for the ZX Spectrum.

What got you into coding?

Early on the Sinclair manual encouraged you to do simple programs and came with a great tape called ‘Horizons’. This had loads of programmes written in basic. This meant I could check out the code and change things.
Another great source to improve coding skills were the early game / computer magazines.
They always had listings in that you had to type into the computer. A good chunk of the time they wouldn’t work and you had to look at the code and work out why.

What was your first coded game?

The first piece of software that was published was an educational game I worked on for the Amiga.
It was called ‘Shapes and Colours’ It received good reviews but was not a big seller.

Which video game world would you like to live in?

It would have to be an RPG world; Final Fantasy 7, Suikoden or Breath Of Fire would be good.

What modern game do you utterly love?

It has to be Legend of Zelda Breath Of The Wild . I have had it for 18 months and I am still playing it. I spend hours just walking round and exploring everything to find hidden Korok seeds, temples and treasure chests.

How important is music in gaming?

It has always been important. Look at Manic Miner on the spectrum that had a fantastic theme.
In modern gaming music is used to set the mood of the game. In Mr Gunboat we wanted a dramatic main theme that would reflect your need to save the world.
The first Tomb Raider game used music in a really clever way. You always knew somethings was about to happen because the music would set the mood. If you look at a modern game like Legend of Zelda Breath Of The Wild  the music changes when you are in danger. It really helps build the tension..

Have you got a favourite soundtrack or piece of game music?

I think the most effective soundtrack ever in a game has to be for the Original Halo.
Just listen to it, beautiful and perfect for the game.

What style of game do you enjoy?

I have been playing the new Legend of Zelda Breath Of The Wild on Nintendo Switch a lot.
It’s a free roaming game in the Zelda Universe. I just love great games and would say over the years my favourite genre has been RPGs.

Tell us a little about the evolution of Mr.Gunboat?

We , Anthony Dean Gallop and I,  had been working on a couple of projects that had stalled and were desperate to finally release something. We decided that we wanted to make something for mobile with a 1 tap game mechanic.
Between us we know we wanted something with an arcade feel and decided on shooting asteroids.
The main game mechanic was created and working in a couple of days.
The finished hasn’t deviated a lot but we have added lots of little extras to make the game more fun.

How different is coding a mobile game to a PC or console game from the past?

We are in a great age for coders as the modern tools like Gamemaker or Unity really help the process of making games a lot easier and quicker. Back in the 80s it was a lot harder and you really needed to know how to work in machine code to get something work like an arcade game. Most publisher back then wouldn’t publish a game if wasn’t written in machine code.

The modern tools do a lot of the work for you and the developer doesn’t have to worry about graphic modes and sprite handling. A developer can just get on with creating their games.

Will there be different releases for Mr.Gunboat on different devices and platforms?

It is being released on Android first and we are looking to publish on Google Play initially.
Next we will be releasing on other Android stores. Towards the end of May we will be publishing on iPhone and iPad. We have even discussed doing a version for PC and Mac.

Hard one now…what is your favourite thing about Mr. Gunboat?

There are so many nice touches in the game. The submarine attack always makes me smile. The voices made me laugh out loud when I first heard them in the game. The music is so good, as good as anything you will find in another game. The arcade machine graphics for the game over screen were inspired.

Ok and even harder question now…Boiled or Scrambled egg?

Has to be boiled. You can’t dip soldiers in scrambled egg and I am pretty good at doing runny boiled eggs.

Eggy soldiers? Num. Breakfast at yours then matey!

More questions from Anthony in a few days, Finn the music man and more. In the meantime warm them there fingers up as Mr. Gunboat will be released very very 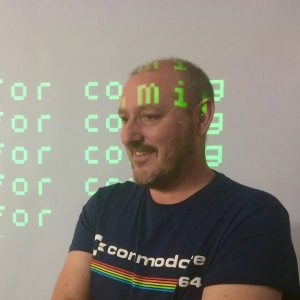